NFL Kickoff Blog, September 8, 2016: The NFL season is here.  NFL Kickoff features a rematch between the defending world champion Denver Broncos and the Carolina Panthers on NBC. Peyton Manning has transitioned out as a player and continued as pitchman extraordinaire while Cam Newton hopes to continue pitching fastballs to wide receivers and running touchdowns as fast as Usain Bolt. Cam–marketed as Super Man–hopes to orchestrate and celebrate a win. Super Bowl 50 MVP Vaughn Miller will have something to say about that. He cashed in over the off-season with a new deal and earned a spot as the pitchman for Madden NFL 17.

Six Sunday games will be marketed, promoted and viewed by rabid fans with week one concluding Monday night with the Rams versus 49ers. Football is back in L.A., and the cash cow that is the NFL is ready to moo. Rams rising star running back and first-round pick–Todd Gurley–overcame a serious knee injury in college and seems to be well on his way to a great NFL career. Forty-niners quarterback Colin Kaepernick has been relegated to backup. Can Kaepernick, who’s rockin’ the afro and standing for a cause, get off the ground and rebound as the starter and star he once was? The sale of his number seven jersey is on the rise, and he’s guaranteed millions, but I’m certain his life has changed forever!

So as you snuggle up with your phone, tablet or television to watch week one of the NFL season, and cheer for your favorite team or player, consider the man behind the helmet: his truth, his burdens, his family, his plight, his legacy. Think about what the guy that made at least $400,000 last season is feeling like after failing to make an NFL roster this season. Ponder what sports teams and leagues are doing or not doing to help athletes in transition. Consider why many athletes struggle when the cheering stops. Then checkout this video to learn about the greatness that is within every athlete that has made it to the top of his or her profession. If the video moves you, please complete our Corporate Opportunities Form to talk about how your organization can help an active or former NFL player interested in finding a career after football.

The Right to Peaceably Assemble 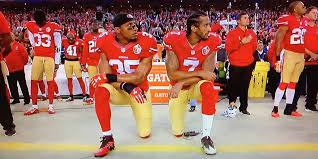 Week One Blog, September 13, 2016: Sixteen NFL games were played between Thursday and Monday night with 1,696 players as willing gladiators. Players aligned in their respective team colors down like four flats for one cause: they “play to win the game.” The standard-bearing Patriots pulled out a close win over the Carson Palmer led Cardinals without future Hall of Famer, Tom Brady, who sat out the first of his four game suspension for deflate gate. The quarterback-driven NFL saw the Browns bet the farm on RG3 who was injured while playing QB like an RB. The Cowboys Dak Prescott was impressive in his rookie debut, but Archie’s baby boy Eli led the Giants to a win. Super Cam took multiple hits, and at least one headshot, in the Panthers loss to second-year signal caller Trevor Siemian and the defending world champion Broncos. Four of the five top rated quarterbacks after week one led their team to victory: Brees (Saints over Raiders), Stafford (Lions over Colts), Winston (Buccaneers over Falcons), and Dalton (Bengals over Jets). Luck of the Colts was the only one in the top five to lose.

Storylines abound in each of the NFL’s 32 markets. What caught your eye after week one? The pure any given Sunday competition. The success of your favorite team. The outcome of your fantasy team. Was it the beer and food at the tailgate? Were you moved by the nine-eleven tributes, player acts of solidarity, or your payout from Vegas?

Did the Dilfer-Kaepernick debate hit your radar? During ESPN’s Sunday Morning Countdown Dilfer, a former NFL player and Super Bowl champion, commented that a backup quarterback should keep quiet because he was bringing attention to himself to the detriment of the team. Kaepernick responded after a decisive 28-0 Monday night win by stating that Dilfer should speak to families that lost loved ones to police brutality then reconsider his positon. The flagship network has kept the dialogue going about the flag. First amendment rights were exercised by the network as talking heads continue to take sides.

So why is Kaepernick’s exercise of the first cramping the style of so many? We polled a few players from the PNE network without consensus regarding whether high paid athletes have the right to use their employment platform to twerk with lady liberty as an expression the inalienable rights she granted long ago. Players were equally neutral on athletes’ responsibility to live as role models or advocate for certain causes. Most, however, were interested in the alignment of ideas and actions that contextualize the value, worth and contribution of athletes to their families, communities and the country. We heard hope for a better tomorrow. Our half-full cup runneth over with with the belief that opportunities for growth will be presented as a result of a peaceful protest from a “so called” backup.

Harken back to the days when Ali was vilified. Are you aware of Jimmy the Greek ‘s comments about the breeding of athletes? What do you make of the challenges and triumphs of Doug Williams and Tony Dungy? Can we view Kaepernick’s fight similarly to Brady and Brees’ challenge of the NFL establishment or Bernie’s attempted takedown of bureaucrats in Washington? Can Trump really suggest building a wall?

Why not embrace this refreshing, trailblazing energy coming from elite athletes of today? Carmelo woke up Jordan. D-Wade lost a family member to violence and is talking about it. Kaepernick—whom is likely receiving counsel from wise men within the 49ers organization such as Dr. Harry Edwards, Pastor Earl Smith, and former 49er star turned executive Keena Turner—pledged a million dollars and received a verbal match from 49ers ownership. So in this day of excess and materialism, please consider how kneeling will have netted two million large towards a colossal American issue called police brutality!

So-what if Kaepernick never has another productive moment as an NFL quarterback! He is no backup. He’s a starter. He added a log to the dialogue. His legacy has begun. The seeds for life after football have been planted. His options are plentiful. Might he pursue a second career as a fundraiser, an advocate for human rights, a counselor, a national spokesperson, a politician, or the executive director of his own private foundation? Might we find him on a mountain top one day, reciting the words of Dr. King, “free at last, free at last, thank God Almighty I’m free at last.”

We close with a PNE salute to the courageous Collin Kaepernick and the brotherhood of players that have his back. Big ups to Charles Woodson and Randy “Straight Cash Hommie” Moss for their willingness to express support as ESPN journalists without fear of retribution or backlash. The quarterback club of the NFL is a unique brand in and of itself. What might we hear from his brand of brothers in the quarterback club?