Malcolm Mitchell, a highly sought after high school All American wide receiver from Valdosta, Georgia, will play his last game for the University of Georgia (UGA) today (1/2/2016) in the Taxplayer Bowl in Jacksonville, Florida. Mitchell has dreams of playing in the NFL and will have the opportunity to show pro scouts he is worthy when he plays in the Senior Bowl on January 30, 2016.

Mitchell, however, will more than likely be known for something much greater than his athletic prowess. HIs “reading is fundamental” philosophy started when Mitchell arrived on the UGA campus and realized he was behind in reading. “I was having trouble competing in the classroom and it was my responsibility to do something about it,” says Mitchell. Mitchell’s decision to compete in reading developed into a passion for reading. His passion for reading led to uncommon results for a young athlete of his age. Mitchell, who is black, joined a predominately white middle-aged female book club during his sophomore year.

In addition to joining the book club, Mitchell petitioned the NCAA and obtained the rights to own and operate a for-profit commercial enterprise during his senior season. The first collegiate athlete to do so in NCAA history. Under his business, Read with Malcolm, Mitchell authored his first book, The Magician’s Hat. Mitchell strongly believes he will be playing in the NFL next fall and is getting a jump on leveraging the NFL brand by attending PNE 2016. He will be giving away 50 copies of the book symbolic of Super Bowl 50.

Click the photo below for more information about Malcolm. 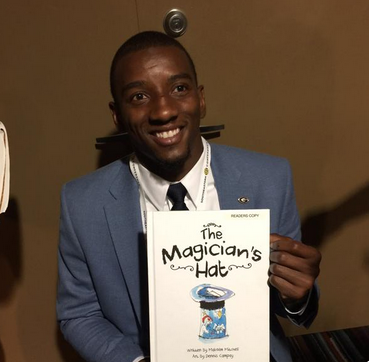