Billy Johnson was drafted in the 15th round of the 1974 NFL draft by the Houston Oilers. He’s a member of the College Football Hall of Fame, the NFL’s 75th Anniversary All-Time Team, and a three time All Pro. He was small and fast. He’s always been a humble man, God-fearing man that loves to entertain. And for 11 NFL season he entertained the world with his funky chicken end zone celebration.

Whiteshoes is a pioneer! He was not a brash in your face showboat–just an elite athlete that loved to entertain. He set the stage for the fun in today’s game that’s now being legislated out.  An ironic twist inasmuch as the NFL has documented and applauded his legendary contribution to the game.

His professional life has been dedicated to service. He’s the former Director of Player Development for the Atlanta Falcons and currently coaches high school football and track.

Click here to learn more about the man we call “Shoes” and consider joining us at PNE 2017 to meet an American icon. 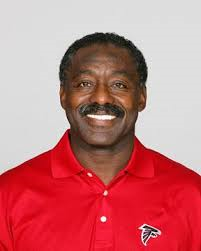 Bryon Scott’s PNE Testimony: He Came to Sing, Networked, and Became an Owner Marques Ogden: The Poster Child for the Phrase a Setback is a Set Up for a Comeback